However there is considerable ambiguity over exactly what is low carbohydrate. Many companies have seen low carb popularity as a brand to be exploited.

All food is made up of three primary macro nutrients – carbohydrates (or sugars), proteins, and fats. Low carb implies that the percentage of carbohydrate (by calorie) is low – but lower than what?

However it is common to find that any diet less than 50-60% carb ratio is called a low carb diet.

Depending on one’s sensitivity to carbohydrates, a moderate carb ratio may be better than a high carb ratio.

By definition, the lower the carb ratio – the higher the fat and protein ratio. Generally speaking a low carb diet will also tend to be a high protein diet. 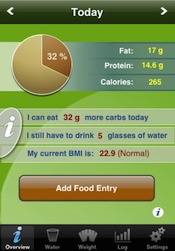 For those following a low carb diet, tracking your daily carb intake is essential.

In order you ketosis to take place a very limited amount of carbs can be consumed each day.

The Low Carb Diet Assistant iPhone App makes counting carbs easier. It basically does all the work for you using its huge database of foods.

It also tracks your carbs and tells you exactly how many grams you can eat each day, which makes sticking to the strict eating routine a bit easier.

The following diets are generally all ‘lumped’ together under the definition of ‘low-carb’. However they actually are made up of little or no carbs – to some that are moderate carb.

What’s unfortunate is that a lot of these foods are very processed, and are not rich in nutritional quality. Clever marketing has come to the fore, with terms like “Smart Carbs” and “Net Carbs” appearing on many products.

The craze began to decline towards the end of 2004 but continues to be popular.

It Doesn’t Work For Everyone

Some people respond very well to low carb eating and lose weight quickly. However, some do not. It really depends on your genetic make-up and how you process carbs based on it.

A low carb diet is just one of the many viable methods a person can use to lose weight or stay slim.