Dr. Robert Atkins first wrote about the Atkins diet in the 1981, in his book The New Diet Revolution.

In response to the negative press some aspects of the Atkins program received, the people at Atkins have revamped their program in 2010 so that it lined up with a healthier way of eating called  The New Atkins for a New You. At the end of 2013 Atkins revamped their diet once again with their new book, The New Atkins Made Easy. 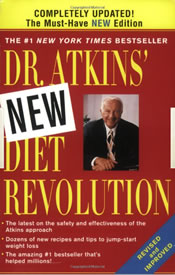 Atkins has four phases – all with a carefully controlled level of carbohydrate intake.

The restrictive induction phases lasts for a minimum of two weeks and calls for a maximum of 20 grams of carbohydrate intake (no starchy vegetables, fruits, grains, bread).

Weight loss on the Atkins diet is based on the process of Ketosis:

“First, the main source of energy for our bodies is carbohydrates. When we have fewer carbs in our body, it must look elsewhere for another source of energy. Next in line is stored body fat. So reducing carbs forces the body to burn fat. This process is called Ketosis. Secondly, carbs stimulate the creation of insulin. Insulin is what converts excess carbs to fat. So when you have less carbs you have less insulin and therefore create less new fat.”

The Ongoing Weight Loss phase involves adding more fibrous vegetables (carbohydrates) until the “Critical Carbohydrate Level for Losing” is reached. The small increases in carbohydrates are carefully managed on a week-by-week basis.

These phases are maintenance phases – where carbohydrate intake can be increased – but only until the point that weight is maintained (Critical Carbohydrate Level for Maintenance). Any food that may lead to weight gain should be avoided.

The New Atkins For a New You is designed to reflect a greater emphasis on healthy, nutritionally dense foods along with portion control. Atkins has recently strengthened their online diet program and is in the process of making their services international.

The New Atkins for a New You differs from the original in the following ways:

One of the problems with the older versions of the Atkins Diet was all the guess work involved in following the plan. The New Atkins Made Easy seeks to remove all of the guess work.

It gives dieters step by step instructions on exactly how to follow the diet in the easiest way possible, including how and when to reintroduce carbs, which has often been a difficulty with previous versions.

Also Included in The New Atkins Made Easy in the following features:

How to Get the Complete Atkins Plan

Atkins has been very successful for many people and has resulted in not only significant weight loss – but also health improvement.

Many people do find the diet demanding at first and need to make significant behavior modification to get the best out of Atkins.

If you are thinking of beginning this diet, we strongly encourage you to research and read as much as possible before beginning the diet and consult with your health professional.