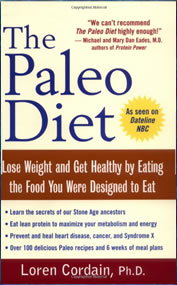 Loren Cordain wrote the Paleo Diet based on his research about the probable diet of our human ancestors.

The concept of the Paleo approach to eating is that humans were evolving for millions of years prior to the Neolithic period, which is when agricultural practices changed our diet considerably.

Cordain affirms that grains were not a part of the prehistoric human diet and were only introduced at the time of the agricultural revolution 10000 years ago.

In the past 200 years the industrial revolution has changed our diet to an even greater degree with the introduction of processed and artificial foods as well as an increase in the amount of food that is available to us due to our ability to store foods for a long time.

Cordain claims that these changes have created a detrimental effect on our health and declares that they are responsible for the diseases of modern civilization including obesity, diabetes, heart disease and cancer.

Cordain states that the genetics of humans is best adapted to the diet of our human ancestors prior to the introduction of agriculture.

As such the Paleo diet is based on eating foods that would be available to humans in the absence of all technology so as to mimic the diet of hunter-gatherer societies as much as possible.

Many foods are restricted on this diet for the reason that that they were not available to our prehistoric ancestors. These include all processed foods, sugar, salt, grains, legumes, dairy products, coffee and alcohol.

There are 5 main food groups that the paleo diet believes aren’t part of human evolution.

These foods have the most instances of causing health problems like allergies.

Potatoes are also restricted because the varieties available now are genetically and nutritionally altered and are much higher in carbohydrates in comparison to those available in Stone Age period.

While eliminating grains and refined carbohydrates does make this a relatively low carbohydrate diet, it is less restrictive than other diet plans of this nature such as ‘Atkins‘ and ‘Protein Power’ because most fruit and vegetables are allowed in unlimited portions. 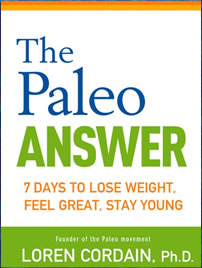 The Paleo Answer is the latest book by  Loren Cordain.

It expands on the principles outlined in Cordain’s earlier books, highlighting the benefits of eating like our caveman ancestors.

Cordain explains that this program is “about adopting a modern healthy diet and lifestyle consistent with our genetic heritage as hunter-gatherers”.

Primarily the book focuses on how to eat like our Stone Age ancestors by consuming the same food groups they did.

Cordain applies the latest research to topics including:

The meal plan includes suggestions for three meals and two snacks daily. Recipes are not provided but readers are referred to “The Paleo Diet Cookbook”.

If you are strict with the diet 85 percent of the time you can realize significant improvements in your health. The other 15 percent – which equates to about three meals a week – can include foods not normally allowed.

Also provided in the seven-day plan are health tips and specific recommendations for exercise and relaxation. 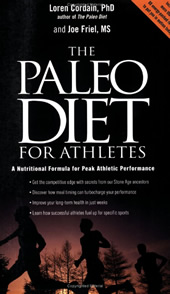 Cordain recognizes that endurance athletes require a higher intake of carbohydrates in order to replenish fuel stores after a long and intense workout.

As such the program for athletes makes changes to the basic program to allow the intake of some foods that are not included in a Paleo Diet.

The major adjustment to the program is that certain high glycemic index carbohydrate foods are included during the immediate post-workout period. For the remainder of the day the dietary pattern is the same as the general Paleo Diet program.

The Paleo Diet For Athletes outlines five periods of the day in relation to the training schedule of the athlete and explains the nutritional goals of each stage.

For each stage he outlines in detail the specific foods to be eaten and amounts to be consumed as well as the recommended nutrient composition of the meal.

Paleo Diet For Athletes: A nutritional formula for peak athletic performance retails at $15.95.

There may be an increase in grocery expenses due to the requirement to purchase more fresh produce, seafood and lean meat.

An alternate to Lee Cordain’s diet is The Primal Blueprint written by Mark Sisson. It is also based on the concept of eating foods that were available to our Paleolithic ancestors because this is the diet that our genes are designed for, but it also involves addressing other lifestyle factors that have an important influence on our health and our ability to maintain an optimal physique.

There are ten major paleolithic principles of The Primal Blueprint 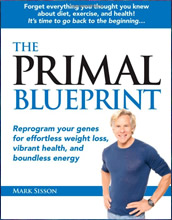 Primal Blueprint says that most popular diets look at daily calorie intake as being the major factor in our ability to lose weight. It also points out how most diet gurus generally prescribe one-size-fits-all recommendations for intakes of fats, protein and carbs.

However according to this paleolithic diet, this goes against our natural functioning because “our genes are accustomed to the way our ancestors ate: intermittently, sporadically, sometimes in large quantities, and sometimes not at all for days”. While the author acknowledges the importance of portion control he suggests that rather than measuring portions at each meal it is better to monitor your long-term intake over a week or more.

This approach also makes it more practical to follow an eating plan for weight loss because it can allow for occasional splurges and variations in our appetite and energy levels. Sisson says that the Primal Blueprint is “about understanding the effects that certain foods and exercise have on your body and then being able to make informed choices.”

If dieters commit to The Paleo Diet it or the Paleo Answer can certainly be very effective for weight loss and will reduce the risk of diseases that are associated with obesity and the modern western diet.

However it may be difficult to follow especially in the initial stages and many people will experience unpleasant reactions such as fatigue, headaches and cravings. Usually these disappear after several weeks and from that point on The Paleo Diet is generally very easy for the majority of dieters to adhere to.

See Also: Paleotest.com– A quick online assessment to see if a Paleo Diet is right for you.