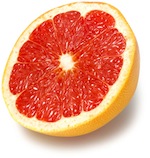 The so-called grapefruit diet is one of those mythic fad diets that seem to come and go every few years.

It is a poor diet – very low in calories, nutrient deficient, and cannot be sustained beyond a matter of days.

You might lose some water, some muscle, and a bit of fat – then gain it all back again.

What started the Grapefruit Diet fad?

The Scripps Clinic made a press release claiming that the humble grapefruit does assist in fat loss.

The 12-week pilot study, led by Dr. Ken Fujioka, monitored weight and metabolic factors, such as insulin secretion, of the 100 men and women who participated in the Scripps Clinic “Grapefruit Diet” study.

On average, participants who ate half a grapefruit with each meal lost 3.6 pounds, while those who drank a serving of grapefruit juice three times a day lost 3.3 pounds. However, many patients in the study lost more than 10 pounds.

However the study seemed isolated, and it was unclear just how much support came from the Florida citrus industry body. A further study was undertaken, and found that red grapefruit “significantly decreased blood levels of triglycerides.”

The grapefruit was consumed by patients who “had undergone coronary bypass surgery and had found that Zocor, or simvastatin, was ineffective.” (to be published in this journal)

…the study’s lead author said that eating red grapefruit would “most probably” help anyone with high cholesterol, not just heart patients.
The star ruby grapefruit has a yellow peel with a red blush and an intensely red pulp. It is very sweet and has few or no seeds.

The Grapefruit Diet fad version is a weight loss diet built solely around the humble grapefruit.

The grapefruit is a marvelous fruit – a natural simple carbohydrate high in fiber and vitamin C. But to use it as the sole foundation of a weight loss program is unwise. However recent research has discovered that the grapefruit has more to it than meets the eye.

A lot of the grapefruit diet plans that have been circulating are very low-calorie diet plans (VLCD’s) with a grapefruit thrown in. VLCD’s are not a good weight loss solution for many people. Most versions of the Grapefruit diet are identical to the Mayo Clinic Diet.

Below is the outline of another version of a grapefruit fad diet – and it IS NOT RECOMMENDED.

Note that there is also substantial evidence that grapefruit (unlike any other citrus fruit) can interfere with medication.

The grapefruit diet works simply because of calorie restriction and doesn’t have much to much to do with the grapefruit itself. Grapefruit can be incorporated into any diet for the health benefits it offers, but calorie cutting is still the key to successful weight loss.

The Super Skinny Grapefruit and Egg Diet which retails for $4.99.