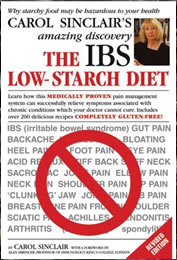 The Low Starch Diet is a prescribed treatment option for IBS.

Irritable Bowel Syndrome (IBS) is a bowel disorder of the gastrointestinal (GI) tract resulting in recurring abdominal pain and discomfort, alterations in bowel function, diarrhea, constipation (or a combination of both), usually over long periods (months or years).

IBS may affect as many as 20% of people in the UK at some time in their lives, and reportedly 10%-20% in the USA have been diagnosed with IBS.

Females represent over 70% of IBS sufferers. Recent findings suggest that the colons of IBS sufferers react to stimuli that do not affect normal colons, and their reactions are far more severe – irregular or increased GI muscle contractions producing lower abdominal pain and cramping (often severe), extreme diarrhea and/or constipation, gas, and bloating.

Irritable Bowel Syndrome is not the same as Inflammatory Bowel Disease (IBD), which refers to two chronic diseases causing intestinal inflammation: ulcerative colitis and Crohn’s disease, although IBS and IBD have some common features.

There are a number of dietary approaches to the management of IBS; Carol Sinclair’s IBS Low Starch Diet differs from most in two respects:

Carol Sinclair’s book The IBS Low Starch Diet details her years of struggle with IBS without any answers until she heard a doctor talking about the theory that among other chronic conditions, IBS was caused by food intolerance. It was stated that eliminating wheat flour from the diet could eliminate the symptoms!

She promptly gave up wheat in her diet with immediate relief from her symptoms, and for about a year remained totally free from pain and bloating. When the symptoms returned, she set out on the task of identifying problem foods, spending many years researching and refining her diet as a virtual ‘walking laboratory’.

Her eventual discovery that starch was the cause of her IBS symptoms has resulted in her book ‘The IBS Starch-Free Diet’, the complete guide to a starch-free lifestyle. There is a chapter on each of these topics:

A sample menu, starch-free of course:

Validity of starch effects in the diet

Significantly, two recent developments have given impetus to the starch-free, or a low-starch, diet.

It is possible that a simple blood test can diagnose your symptoms, and that a low-starch or starch-free diet may improve your health.

What about starch foods in other IBS diets?

The apparent paradox – soluble fiber is most important dietary aid for preventing Irritable Bowel Syndrome symptoms initially as well as for managing the symptoms of IBS. Soluble fiber prevents and heals diarrhea and constipation, unlike anything else.

Since it dissolves in water and soaks up excess liquid in the large intestine it stops diarrhea, or cures constipation by softening faeces for a smooth transition through the colon. Trouble is, soluble fiber is NOT typically found in foods usually considered to contain fiber, such as bran or raw leafy green vegetables; this is insoluble fiber.

So what about the starch in insoluble (therefore digested) fiber foods?

Fiber Foods for an IBS Diet

At the top of the list are common foods that many can eat everyday and ones that most people have success with, but if you adopt the starch-free diet, check out how to remove starchy insoluble-fiber foods from your menu. Note that the recommended daily soluble fiber consumption for a ‘normal’ person is 5-10 grams.