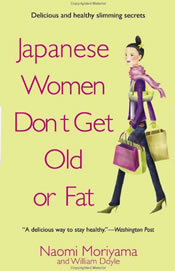 The Japanese Diet is the reason that Japan has some of the longest life expectancies in the world.

But what is less well known is that Japanese women have the lowest rates of obesity (only 2.9%) in modern cultures.

In Japanese Women Don’t Get Old or Fat author Naomi Moriyama shares with readers the basic elements of the Japanese approach to eating stating that her book is “not a diet plan but a whole new way of falling in love with food”.

The emphasis is on small portions of fresh seasonal food. Dieters are advised to value quality over quantity and to eat slowly so as to appreciate the flavors of the food and reach a feeling of satisfaction with less food.

A major factor of the Japanese way of eating is to eat until 80% full. In addition a great deal of emphasis is placed on presentation and making the food look beautiful and appealing to the eye.

Dairy and bread are not part of the diet and when beef and chicken are included in meals they are regarded more as condiments rather than the main focus of the meal. Fresh fruit is the preferred dessert however if a richer dessert is eaten it is in very small quantities.

In Japan breakfast is considered the most important meal of the day and is often the largest. Moriyama introduces dieters to the concept of the Japanese power breakfast, which consists of miso soup, rice, egg or fish, vegetables, fruit and green tea.

Moriyama outlines the seven pillars of the Japanese diet that are the foundation of the dietary aspect of this plan:

The Japanese Diet conveys to dieters that it is not enough to eat like a Japanese woman but it is necessary to adopt similar lifestyle habits.

The Japanese achieve a lot of physical activity by simple actions such as walking, climbing stairs and using a bicycle to run errands rather than relying on motorized transport.

There may be an increased cost for groceries and equipment for food preparation especially in the initial stages of the diet.

Eating Healthy Foods is the Key

This is a healthy and balanced approach to eating particularly if brown rice is selected as the major source of complex carbohydrates in the diet and if generous portions of vegetables and fruit are included in the daily diet.

However, it is important to be aware that there is no magic to Japanese foods and if dieters are to be successful it will be necessary to pay attention to portion sizes and limit calorie rich foods in the diet.