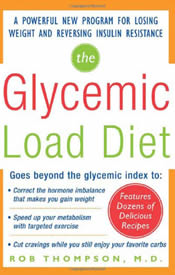 The Glycemic Load Diet, by Rob Thompson, MD is a refinement of earlier low-carbohydrate diets.

It aims to reduce the glycemic load in the diet – the impact on blood glucose levels of a serving of a given food, as identified in the Glycemic Index.

The increased consumption of starchy carbohydrates, particularly wheat, is held to blame for the obesity problem. Also, the claim is made that insulin resistance (said to be present in 22% of the population) would be less evident if starchy carbs like rice, potatoes and bread were reduced.

Insulin regulates glucose consumption in the body, mainly the muscles. If these become insensitive to insulin (called insulin resistance) then weight-gain results. Refined carbs are the major source of glucose in the diet. For example, it is suggested that no more than a quarter-serving of these foods be consumed at one sitting, alongside cutting out drinks and juices with added sugar.

The Glycemic Load Diet also requires 30-40 minutes of walking every other day, with the objective of activating ‘slow-twitch muscle’ to improve the insulin resistant condition.

The glycemic load corrects that figure for serving size or amount consumed, and it this glycemic load which forms the basis of the Glycemic Load Diet. The advice given is that the total glycemic load in foods consumed each day should be under 500.

This list is quoted in the book The Glycemic Load Diet.

As such it uses a different formula than other measures of Glycemic Load such as the University of Sydney.

The book The Glycemic Load Diet retails for $16.95 contains about 80 pages of recipes. There are no meal plans as such.