Psychology professor, Seth Roberts promises freedom from hunger, cravings and food obsession on his Shangri-La Diet. Roberts claims his diet is “almost as easy as taking a pill, and a hundred times safer and less expensive.”

The underlying theory behind the diet is that the body has a ‘set point’ which is the weight that it naturally endeavors to maintain. The basis of Roberts’ approach is that the ‘set point’ can be reduced to a lower weight by consuming small quantities of plain olive oil and sugared water in between meals.

Roberts also adds to his theories about dieting by suggesting that the body learns to associate high flavor foods with calories and this drives us to overeat our favorite foods. By consuming a diet composed of only bland, tasteless or unfamiliar foods, in addition to the oil and sugar water between meals, he claims that it is possible to reduce the appetite and caloric intake which subsequently will produce weight loss. 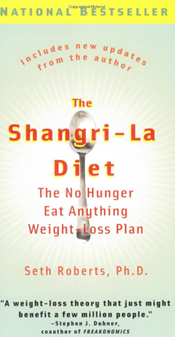 There are no real guidelines to the diet and the only requirement is that dieters include approximately 300 calories in the form of either light olive oil or sugar water which is taken in between meals.

Roberts proposes that as long as you add the oil and sugar water to your diet you don’t have to worry about what you eat because you won’t have much of an appetite. He says that this means that it will make it easier to choose healthy foods, and even if you choose higher calorie foods you won’t eat as much of them.

Roberts stresses an individualized approach because all of us have a unique set point and does not offer any specific advice for planning meals.

There are no meal suggestions or menu plan.

As an example The Shangri-La Diet’s personal maintenance plan is composed of one normal meal which contains approximately 900 calories, as well as 150 calories of sugar water between food and 2 pieces of fruit per day. His total daily calorie intake is 1200 calories.

No exercise is recommended.

The only other expenses are olive oil and sugar.

Although the oil may actually reduce appetite Roberts is probably stretching his theories too far with lack of real scientific evidence for his claims. It seems highly likely that having 3 small 100 calorie snacks daily in between meals could produce similar effects on appetite control. When considered from this perspective the Shangri-La diet does not seem to differ from many standard diets that recommend three meals with three small snacks.

Nonetheless many people have reported favorable results on this diet and Roberts has many supporters although it appears that there are an equal number of dieters who don’t do well with his approach.

The Shangri-La Diet’s failure to address lifestyle factors such as exercise and psychological reasons why people gain weight weakens his arguments and most people will probably not find the idea of a lifetime of eating bland tasteless foods very appealing.