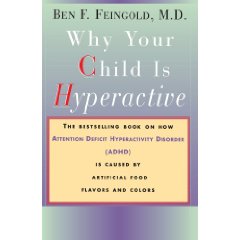 The Feingold Diet derives from the program suggested in the book “Why Your Child is Hyperactive”, first published in the 1970s by Dr. Benjamin Feingold, a pediatrician and allergist.

The Feingold Diet is based on the premise that allergic reactions or sensitivities to certain types of foods cause or contribute to ADD/ADHD symptoms, such as problems with:

The Feingold Program is more comprehensive than a simple diet, and operates in two stages. Stage 1 eliminates chemical compounds in particular food additives, and salicylate compounds in certain foods (and non-food items such as fragrances – hence the name Program rather than Diet). See below for a list of items for elimination. Stage 2 involves identifying which salicylates (if any) can be tolerated.

Many ADD/ADHD sufferers who follow the Feingold Program have experienced great improvements in focus and behavior. There is a considerable (recent) research to back this up (see more).

Studies in the early nineties show that around 75% of children improve on a diet that restricts additives.

The Feingold Program eliminates these additives and chemicals:

A less rigorous approach than the Feingold Program, given that many studies have shown the sensitivity of some children to dyes, is to start by eliminating only those foods (and vitamins, drugs, and toothpastes) that contain artificial colorings.

If initial dietary changes have little benefit (i.e. excluding only dyes), try the complete Feingold diet. It is important to use a diet diary or journal.

If that doesn’t help, the Feingold Association recommends eliminating:

After several weeks, if the child’s behavior has improved, every few days restore one eliminated food or ingredient at a time. Repeat that two or three times if a problem occurs, to confirm that the food is really a culprit.

If the child’s behavior did not improve on the Feingold diet, try a “few-foods” diet, which involves more extensive restrictions (see Elimination diets). Studies show that some children are sensitive not just to food additives but also to such foods as:

Eliminate as many of those foods as possible, plus artificial colorings and other additives. Children can eat fresh meat and poultry, any vegetable (except corn and soybeans), fruits and fruit juices (but not citrus fruit/juice and not beverages normally consumed daily), rice, and oats.

Look here for recipes to use with The Feingold Diet.