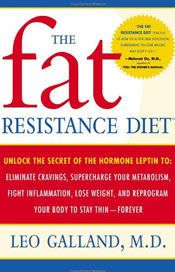 The Fat Resistance Diet is the creation of Dr. Leo Galland who is recognized as an expert in the field of nutritional medicine.

It is based on the concept that hormones, which include leptin and adiponectin, control the appetite and body fat levels in the body.

When the body fat level becomes too high this causes inflammation that subsequently alters the body chemistry and balance of these hormones.

Dr. Galland states that it is possible for dieters to achieve their ideal weight by reducing inflammation and restoring the biochemistry which works to reduce cravings, increase metabolism and promote fat burning. In addition this dietary approach has been associated with improvements in cholesterol and blood pressure.

There are three stages to the diet. In the initial stages most high carbohydrate foods are avoided such as grains and starchy vegetables. As the dieter progresses through the three stages the amount of carbohydrates is gradually increased.

The foundation of the diet is an abundant intake of fresh fruit and vegetables as these contain phytonutrients such as carotenoids and flavonoids that have an anti-inflammatory effect.

Fresh herbs and spices are also regarded to supply the body with important nutritional factors that reduce inflammation as well as improving the taste of foods without adding calories.

The diet also emphasizes increasing the intake of foods that are high in good fats such as the omega 3 fatty acids found in fish, walnuts, flaxseed and green leafy vegetables. These fats play an important role in reducing inflammation as well as improving general health.

The diet plans are designed to allow for a weight loss of two pounds per week. Separate plans are provided for each stage of the diet.

Look for other meal ideas here.

This is a very high nutrient diet that will no doubt improve many aspects of the dieter’s health both in the short term as well as preventing many chronic diseases that are associated with aging while allowing for weight loss that can be maintained as part of a healthy lifestyle.