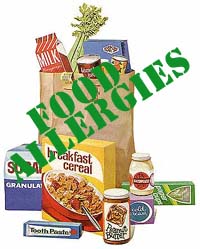 Elimination or allergy diets are used to isolate food allergies or food sensitivity. A food allergy describes an immune system response, whilst a food intolerance is an adverse reaction to food (unrelated to the immune system).

There are a number of medical symptoms that may be related to food; candida, irritable bowel syndrome, diverticulitis, asthma, eczema, migraines, unexplained rashes, and lactose intolerance.

The basic elimination diet first removes all potential food allergens from the diet, and then re-introduces these foods one at a time. These process should always be undertaken in consultation with your physician.

When undertaken an elimination diet, it is advisable to keep a food journal, and log all food items and amounts as accurately as possible – along with any symptoms experienced. This can help to isolate food allergies or intolerances.

Eliminate the following foods from the diet for a period of 7 days to a month:

Note that suddenly stopping some foods (such as caffeine) can result in withdrawal symptoms (typically headaches) – however this should only last a few days to a week.

Next, reintroduce one food group to your diet roughly every 5 days

The reintroduction period allows sufficient time to determine any intolerances.

This drastic elimination diet involves fasting for the first 5 days, taking nothing but bottled spring water. This kind of elimination diet should be reserved for only the most difficult cases.

Do not try this fasting approach without first consulting your doctor.

As the name suggests, this diet involves only eating lamb and pears. The diet is sometimes modified to a turkey and pears, or turkey, rice and pears). This diet is also for only the more severe cases.

The next step up, is the few-foods or rare-foods elimination diet plan. This involves eating a dozen or so foods that the patient eats only rarely.

This is an extension of the few-foods idea, except that instead of eating uncommonly- eaten foods the patient is asked to eat exotic items (e.g. yams, buckwheat).