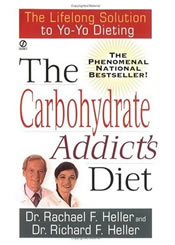 The Carbohydrate Addicts diet was written in 1993 by authors Rachel Heller MD, and Richard Heller MD. The success of the book has led to a number of follow-up books, many of which have been on bestseller lists.

The premise behind the Carbohydrate Addicts Diet (CAD) is that most overweight people are addicted to carbohydrates. The Hellers’ claim that most people fail to metabolize carbohydrates correctly, causing an imbalance of insulin levels. The elevated insulin levels cause a craving for food throughout the day.

Over the last few decades, refined sugars have played an increasing role in our diets. Authorities have esposed a low-fat diet – which has inadvertently lead to people eating far more carbohydrate than is necessary (given our generally sedentary lifestyles).

It should be no surprise that many people have become accustomed to highly sweetened foods. Whether this qualifies as an addiction is up for debate.

At its foundation is a reduction of carbohydrate intake. The rules are strict, with the diet providing a long list of foods, that are on the “allowed” list. Anything not in this list must be avoided.

Each day is split into 2 main meals – 2 meals are made up of a protein source (fish, poultry, lean red meat) and fibrous vegetables.

The 3rd meal is called the “reward” meal – this can be anything you want, but you should aim for a balance of 1/3 carbohydrate, 1/3 protein, and 1/3 fibrous (non-starchy vegetables). This reward meal must be consumed inside 1 hour.

The diet begins with a restricted 2 week phase, but then goes into a variety of eating plans – depending on whether you are maintaining or losing more weight.

Research over the last 5 years has shown considerable health benefits arising from moderating carbohydrate intake. However many find such diets difficult to sustain over the long term – much of our social eating patterns are based around carbohydrate foods.

Many people have found success with this plan (as with many low-carbohydrate approaches). Proteins and fats often lead to a greater feeling of fullness – leading the dieter to consume less energy as compared with a high carbohydrate diet.