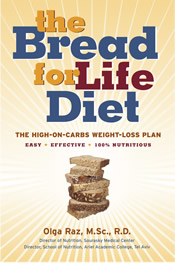 Created by Israeli nutritionist, Olga Raz, the Bread for Life diet is based on the premise that eating generous amounts of bread every day will reduce cravings and help you lose 20 pounds in 8 weeks.

The theory behind the diet is that complex carbohydrates act to increase serotonin levels, which in turn results in a reduction in cravings for sweet foods and decreased appetite.

Serotonin is also the neurotransmitter involved in mood regulation and Raz states that the increase that is brought about by eating bread in large amounts daily will make you feel better and have more energy which in turn will increase motivation to stay with the diet.

The foundation of the diet is bread; up to 12 slices of bread a day for women and 16 for men.

Raz does emphasize that this must be ‘light’ bread which contains 35-45 calories per slice. Heavier breads and those containing nuts and raisins may have up to 90 calories. These are not forbidden but not recommended for everyday use – and allowed as long as daily bread calorie quota maintained.

The importance of using whole grain bread is emphasized because of their low glycemic index which helps to keep blood glucose levels more stable.

It is permissible to exchange the bread servings for other types of complex carbohydrates such as oats, brown rice or pasta.

Foods that are not allowed include butter, margarine and sweet spreads but many other spreads are acceptable including mustard, peanut butter, hummus, tahini, avocado and sugar free jelly. Only one spread is allowed at a time and it must be spread very thin.

Most vegetables are allowed in unlimited amounts and Raz suggests adding salad vegetables such as lettuce, tomato, carrot, cucumbers and sprouts to sandwiches or as an extra side salad. There is also the option of including a cup of steamed or stir fried vegetables or a bowl of vegetable soup with a meal.

Vegetables are recommended because they are high in fiber and low glycemic index which will help you feel full after a meal.

Fruit is recommended only in moderation because Raz claims that its sugar content can raise blood glucose. Raz actually states that fruit is not a necessary part of a healthy diet.

However many fruits have a lower GI than bread and contain mostly fructose which does not have a major effect on blood glucose regulation. For example apples and pears have a GI of 38 whereas many whole wheat breads have a GI of up to 70.

Raz does however make the beneficial suggestion to avoid fruit juices which do have the potential to disrupt blood sugar due to their high glycemic index and sugar content.

Meat, chicken or fish is permitted in 3 meals per week selected from low fat cuts and avoiding processed meats.

3-4 eggs per week are allowed.

There is a scientific basis behind the idea that increasing carbs in the diet can reduce appetite by increasing serotonin levels however this relationship is not as simplistic as the author implies.

Although some people may find that increasing complex carbs in the diet reduces their cravings, experience shows that many people will not react favorably to this type of diet, and it may actually produce the opposite result.