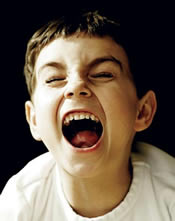 Attention Deficit Hyperactivity Disorder (ADHD) is one of the most commonly diagnosed childhood mental conditions. Most symptoms generally occur before 7 years of age.

Symptoms include inattention, hyperactivity, and impulsive behavior. The condition can continue into adulthood – however adults exhibit a better ability to control impulsive responses.

ADHD has no known cause – although many feel that it is due to a chemical imbalance in the brain caused either by environmental or genetic factors.

Some environmental factors include; toxin exposure during pregnancy, food additives and allergies, sugar, caffeine, and food coloring – however much of this is theory.

Some feel that a typical celebration (such as a child’s birthday party) is linked to high sugar intake and therefore excitable behavior can be linked to the celebration.

The Feingold diet was proposed in the 1970s and linked behavior with diet. However, once again, a number of scientists feel that there has not been enough objective research to concluded that additives are linked with ADHD.

Caffeine is a stimulant and it’s effect is different for different people. Some develop more of a tolerance for caffeine than others.

It is not advisable for a child to consume caffeinated drinks (such as Coke or Pepsi, or other “energy” drinks). Especially if a Caffeine Allergy is suspected.

However, anecdotally, there is evidence that processed foods can be linked with hyperactive behavior.

As a parent you can try to remove as many high-sugar, and colored foods as possible. Juices should be diluted, and sodas, candy, and cookies should be avoided altogether.

Omega-3 is an essential fatty acid (i.e. a form of polyunsaturated fat) found in certain fish, and in vegetable sources (such as flax, hemp, and walnuts). There has been a considerable body of research showing that omega-3 (or more specifically the ratio of omega-3 to omega-6 fats) is essential for correct brain function.

There is even evidence showing that a pregnant mother who is low in omega-3 can affect the brain develop of the baby during the 3rd trimester.

If your child will not eat fish, try mixing in flaxseed oil into certain foods, or look for “enriched” products (such as milks or breads) that have omega-3 added.

Can Diet Make a Difference to ADHD?

Most current scientific research indicates that only a small percentage of children will respond to a diet free of additives. However don’t let this stop you from experimenting with dietary changes.

At the very minimum an ADHD child should be eating 2 fish meals per week.